Light Detecting And Ranging (LiDAR) is a technology that can be useful in historic research because it uses laser pulses emitted from specially equipped aircraft to produce a rich dataset of billions of points noting the heights of surfaces below the detector.  Many consumers of LiDAR data receive detailed contour maps of the land surface, often obscured beneath vegetation by common optical data capture, but this is just one product of the complex LAS dataset.  Each latitude/longitude can have several signals returned to the detector from these laser pulses.  The first pulses will return after striking the highest level of vegetation, anothers can return after reaching lower or denser cover, often the last pulses coming back have been reflected by the “bare earth” surface at the ground level.  The time differences between these returned signals are accurate measures of multiple distances.  This means that a LAS file captured using LiDAR technology is very large and contains many potential surfaces giving a rich description of a specific geographic area. 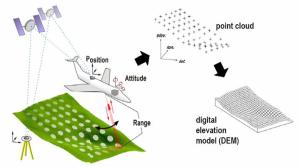 To create a contour map from this data requires the creation of a raster surface first.  A technician will make a query from the LAS data file for a particular set of “returns” and those individual z values for each x and y can be used to interpolate a surface where “missing” values, all points between actual measures, are estimated by an algorithm.  This surface can then be converted to a set of vector isolines, or  “contour lines” of equal height values.  The advantage of these contours is typically their accuracy given the relative ease of collecting data even in heavily wooded areas.  Water surfaces, especially moving water, can complicate the interpretation of returned point values because the laser pulses will be scattered, taking longer to reach the detector.  These “false returns” can confuse the measures of surface heights.  Raw LAS data typically requires an experienced technician to clean these sorts of errant values before deriving any data from the file.