When I first took an interest in locating significant transportation routes of the colonial era in America I thought the process would be much easier.  After all, these important roads were all once well known and they were even mapped repeatedly.  But like so many other “simple” ideas, the actual practice reveals immense, although interesting, complications.  This story is what I have learned along my journey and I suspect it is similar to what others have learned many times before me.  It is my hope, however, to add something new to the conversation.

My first thought for identifying old roads was to “georeference” images of extant historical maps by “warping” them into fitting modern geography. This is a process that has been simplified tremendously by using Geographic Information System (GIS) software on high resolution digital scans of these maps.  Once I had removed the bias of ancient cartographic practices, I assumed that the roads could just be traced and overlaid with current transportation and elevation maps to reveal my prize.  While this turns out to be an important first step, it left me well short of attaining that goal.  What I now had was still only a caricature of that past reality, not the accurate representation that I had hoped for in modern terms.

The bad assumptions in conducting the initial georeferencing process started with the presumption that all of the mapped features in my images had a consistent degree of error or that all of these various features were even intended to be equally accurate.  When working with modern maps this would be a fair assumption, but these historic documents were made under very different circumstances.  Hydrologic confluences (that is the points where streams converge) in current photogrametrically corrected maps are often easily recognized and repeatable reference points.  Although many rivers typically served as early transportation routes, they were not surveyed in the eighteenth century to the same degree as the land routes or even subject to the use of similar measuring equipment for that matter making their use as references troublesome.  The almost child-like squiggles representing streams often confesses a certain amount of presumption on the part of the cartographer.  Not insignificantly, some smaller streams may have altered their courses over the succeeding centuries also making the locational reference somewhat time-sensitive.  Similarly inconsistent are the invisible cadastral boundaries, such as colonial borders, which were often not necessarily fixed to the same modern locations.  As for the roads themselves, they are the subject of the process so it is preferable not to rely heavily on them either.  Consequently this series of inconsistencies seldom leaves much else with which to work but the identification of significant point locations such as villages, mills, fords or ferries which can sometimes be tricky to identify with accuracy today.  Finally, as land was settled by the Europeans who drafted these maps roughly in a chronological pattern from east to west, features commonly on the “right” side of the map (specifically in the East) were often better placed than those further to the “left” (often considered the less important “backcountry” of the West).  Automated rubbersheeting algorithms tend to work best with reference points spread equally and as distantly as possible throughout the map extent, an arrangement difficult to satisfy given all of these constraints described above.  My solution was often a series of trials and errors sometimes forced into localized georeferencing where only a portion of a larger map covering the current area of interest was used at any given time. 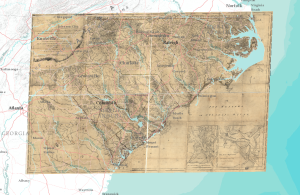 Once an acceptable georeferencing is accomplished, the historic road data can be traced by digitizing lines from the historic map image.  This process creates a connected series of vector coordinates describing the road centerline that can then be further manipulated by adjusting those lines to effectively “warp” them further to ensure that they pass correctly through known locations.  Such an adjustment of the linear road features is called rubbersheeting because it has a greater effect where specific linkages are made and the impact decreases further away from those points.  The reference points could be the modern locations of a town center, mill location, plantation, or river crossing.  The resulting road shapes will retain the basic character of the original drafted line but now they will pass directly through specific locations providing some improvement to the accuracy of the historic data.  Unfortunately the adjusted lines still do not necessarily reflect an actual alignment for the physical road but it does detail a useful form of connectivity between known traffic points.  The denser the network of corrected points, the less distance between them and fewer possible paths could exist connecting them.

[Click on the map image above to open an interactive web mapping application that will allow you to explore the progressive steps of defining route alignments from digitizing the historic roads directly from the georeferenced image through rubbersheeting those lines and comparing the results with modern terrain.  Each map panel can be manipulated to pan and zoom with your mouse and even be coordinated with each other by synchronizing the scale and location options near the bottom of the application window.]

At this point, we can make reasonable assumptions about possible paths for these roads which can be researched further on the ground or, conversely, these results can be used to identify any extant segments already recorded that follow these possible alignments.

There is one more step that can be taken, however.  If the criteria used for path selection by our ancestors – or the wildlife whose trails they confiscated – can be replicated in a computer model, we can actually predict a previously existing path alignment between any given points.  In my initial attempts at this form of modelling, I once again began with simply minimizing slope on a modern terrain surface.  The result was less than impressive as the pathing algorithm designed to find a minimal cost route sought out modern reservoirs (lacking bathymetry data) with flat “surfaces” to traverse.  But even outside these modern surface alterations the predictions were clearly not satisfactory and suggestive of a more complex model being required.  In my attempts to define additional criteria I sought a proxy measure of vegetation and examined county soil classifications studying the tables associated with the National Resources Conservation Service (NRSC) STATSGO digitized soil data.  It was in these related tables that I discovered several useful parameters including a nominal value for the “haul road limitations”, “rutability hazard”, “limitations for foot paths” and “hydric soils” that fit my needs.  I knew that stream crossings were dangerous and avoided at high costs by historic travelers so I weighted cells containing hydrology as identified by the US Geological Survey (USGS) in their National Hydrology Datasets based on a relative stream order and summed all of the appropriate soils values for the other land based cells in each county wide grid.  With the resulting cost surface, paths could be predicted by calculating paths minimizing the accumulative cost for movement across my modeled surface. 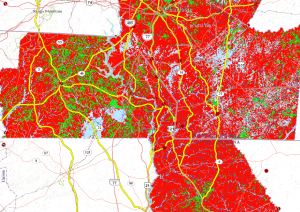 [Click on this image to launch an interactive application to explore the suitability map created to predict historic transportation routes.  The dark blue color showing hydrology represents the most restrictive cells to cross while red highlights the most difficult land cells based on aggregate soil scoring.  Light blue areas represent Hydric soil types that present their own unique challenges to movement.  In this application, the mouse will allow you to pan and zoom in the map in addition to using the ‘+’ and ‘-‘ symbols for zooming.]

The predicted paths from this model, shown in yellow above, helped me identify at least one existing old road on the ground and validate another prediction from an extant road marker.  Hopefully these techniques will be refined and expanded in their use to help identify other extant road segments for future research and preservation.