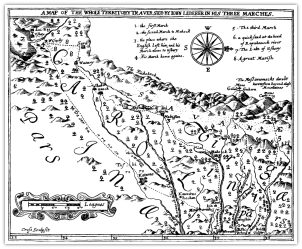 1672 Map by John Lederer of Carolina

As modern consumers, we like to think of maps simply as the representation of absolute truth.  We assume every map is created in a painstakingly unbiased manner and that the very act of viewing a map is to observe an accurate portrayal of some portion of the earth at a specific point in time.  We hold so strongly to this view that when we encounter recognizable errors in a historic map, say, showing California as an island or detail of a large lake that never existed, we chuckle at the obvious naivety of the cartographer or even sometimes suspect sinister motives.  It doesn’t even occur to us that the ignorance is primarily on our part for not understanding that maps must be interpreted within their own context rather than just being read in the absolute.  Scanning John Lederer’s map of his “Three Marches” published in 1672 without reading the text in which it was published would be like attempting to interpret the United States Constitution without considering the intent of the founding fathers or other legal precedents of the Supreme Court.

By their very nature, maps are created as a caricature, or cartoon version of reality, sometimes through a gross oversimplification of what exists in the real world.  The necessary interpretation of a map involves understanding not only the spatial language of representation but the competing demands of the craft as well as the economic and political influences on the mapmaker at the time of publication.  Consequently, every map is the product of its particular time and echos the beliefs and knowledge of its author or benefactor at that moment.  When studied in this light maps are more like eyewitnesses of a particular historic event – that is their creation – in addition to the geographic place that they describe.  The story they have to tell is less like that of a photograph and more like an essay from a personal journal.  Unfortunately, this sort of interpretation takes time and effort.  It is the scientific investigation of a mystery!

An excellent example of such detective work can be found in this article, A New and Correct Map of the Province of North Carolina: The Discovery of a 1737 North Carolina Manuscript Map, published in the Journal of Early Southern Decorative Arts which investigates not only the map, but its story.  As historians, it is up to us to honor the original intent of a map to help us both learn and share its story.

If you have such an investigation, we would love to publish it here as well.  It is our desire to make this blog a repository where stories of cartographic curiosities can be revealed and myths of map-making can be dispelled.